On its 150th anniversary and the centenary of the end of World War I, St. Pancras International unveiled on 8th November 2018, a permanent war memorial created by artist and writer Fabian Peake which reflects on the lives of those who fought and died serving in the armed forces as well as civilians. 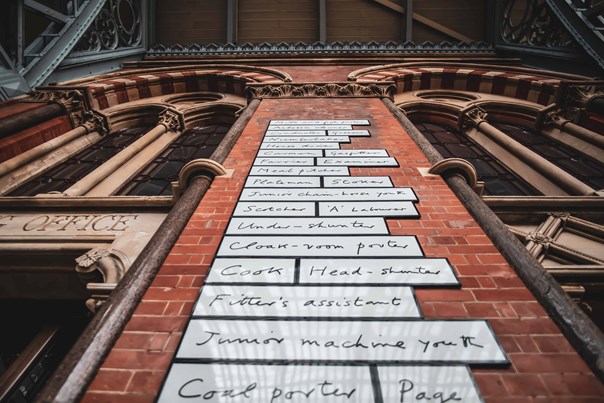 The memorial sits on the station's Grand Terrace, close to the location of bomb damage from two prominent air raids on the station in 1918 and 1941 - the first of which claimed the greatest number of casualties suffered in any air raid on a London station during the First World war. Going forward, the artwork will also mark the location of the annual Armistice memorial held at the station on 11th November.

Inspired by the roles of the men and women that worked at St Pancras (Station, Hotel & Goods Yard), the 4-metre tall memorial is comprised of a series of job titles that represent those who left their work to fight and die for their country. Fabian has used vitreous enamel which has historically been used for signage by railway companies and is still frequently used today.

Three artists were invited to take part in a competition to design the station’s permanent memorial. After presenting their proposals to a panel comprised of representatives from HS1 and industry partners, Fabian Peake was selected for demonstrating a clear engagement with the public and a creative approach to the brief.

Fabian studied painting at Chelsea College of Art and at The Royal College of Art. His work has largely diversified during the past ten years and incorporates cut-outs, photography, drawing, writing, poetry and tailored wall pieces.

Names Of The Fallen

Names Of The Fallen

A railway porter wholly or mainly engaged in loading and unloading milk and fish into and from railway vehicles. The below picture shows a Milk Porter with churns at Somers Town dock 1890. 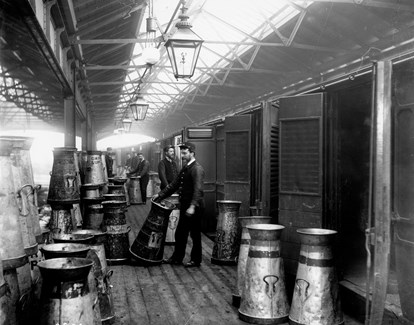 Axlebox Cleaners worked within the Carriage and Wagon Department, their job involved the examining and cleaning of axle boxes, and when necessary, fill or order them to be filled with grease.

They were also responsible for reporting an axle if it had been dangerously overheated. A wagon was a type of rolling stock with a flat bottom enclosed on all sides and top, which is loaded and unloaded from sliding doors on each side. An open wagon type of rolling stock with a flat bottom and relatively low sides, used to haul material such as ore or scrap, and loaded and unloaded from the top which may be covered or uncovered with a canvas sheet, often painted with the company logo or name. 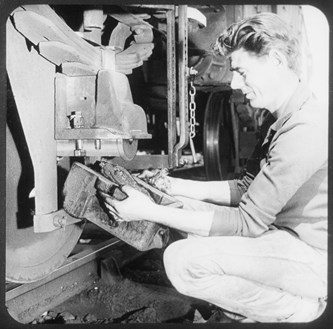 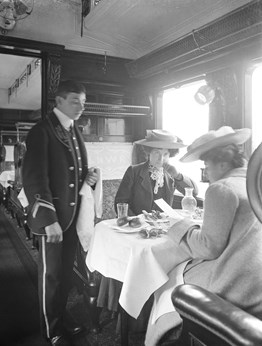 A Greaser filled axle boxes of rolling stock with lubricating oil or grease as required. 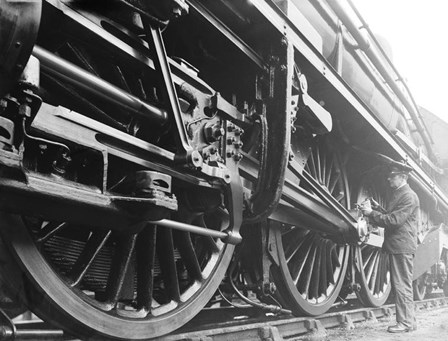 Number Takers were a group approx. 500 strong - who had to stand at junctions across the country noting the movements of every wagon and carriage entering or leaving goods depot, reporting back to the Railway Clearing House in London so that the clerks could balance the companies' competing claims. 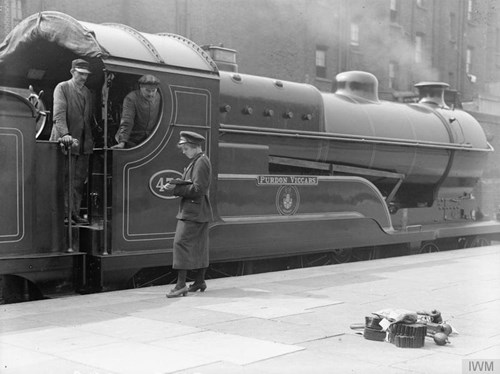 Also known as 'Shunt Horse Driver', the Horse Driver was in charge of the horse which draws trucks or coaches into or out of railway sidings or on to branch lines during shunting operations.

The below picture is of ‘Tommy' c. 1963, one of the last shunting horses employed by British Railways, hauling a horse box used to transport racehorses from Newmarket to meetings across the country.

Shunting horses were withdrawn from British Railways shortly after this photograph was taken. 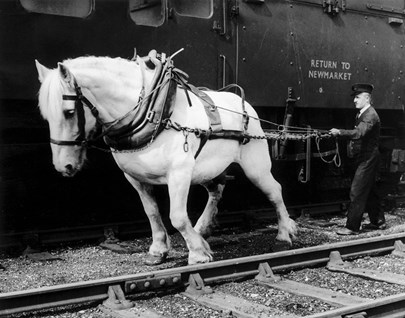 A Carman drives horse drawn vehicles (usually in towns) collecting or delivering goods. Carmen were employed by railway companies and were responsible for safe custody of the horse and vehicle and safe delivery of their goods. 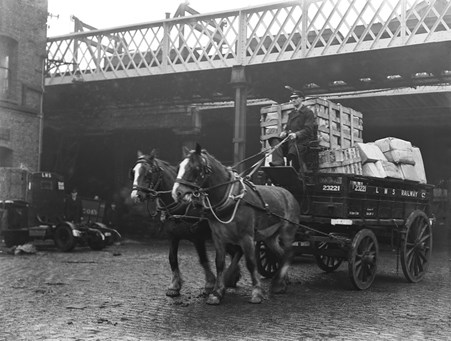 A Gasfitter worked in the Carriage and Wagon Department and was part of the maintenance staff team.

A Farrier is a horse doctor, or a blacksmith who shoes horses but also would undertake other metal work and repairs as required. The below photo is of a Farrier at St. Pancras Station, Kings Road stables in 1936. By this time the Midland Railway had over 100 working horses. 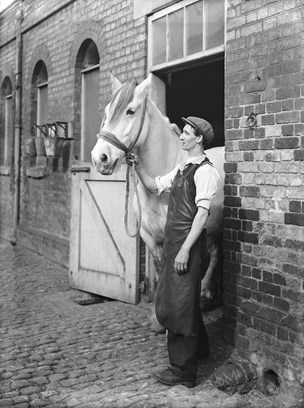 The Carriage and Wagon Examiner inspected carriages and repaired any defects identified.

The Wheel Examiner tested the soundness of the wheels of passenger coaches during a halt at a station or of goods wagons in a yard or siding by tapping the edges of wheels with long-handled steel hammers. 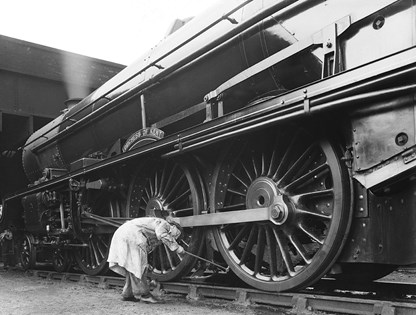 A Wheel Examiner (above), 1936, testing the wheels of the London, Midland & Scottish Railway Princess Royal class 4-6-2 locomotive number 6212 Duchess of Kent. The wheel tapper hit the locomotive's wheels with a long hammer and could detect from the sound it made whether there were any flaws or cracks in the wheels. The examiner was also responsible for checking brakes and couplings.

A Meat Pitcher was a goods porter who handle carcasses at railway meat depots as directed by the General Foreman for goods.

The below photo shows a Meat Pitcher loading meat onto a railway container on the back of a lorry, Smithfield Market, 1938. In the 1930s the railways carried 400,000 tonnes of meat every year although they faced increasing competition from road vehicles. This image is indistinct because the original photographic negative has deteriorated. Meat was often transported in special containers, like this one, so that it could be transferred from door to door without being unpacked. The containers were ventilated and contained packets of dry ice so that the meat stayed fresh. 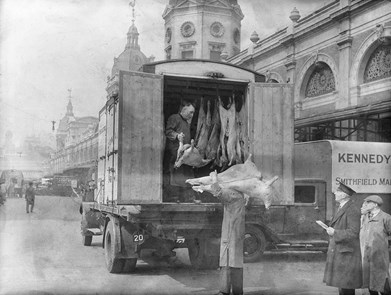 A Plateman washed and dried plates, dishes and cutlery in the restaurant carriages. A Plateman is not to be confused with Plate Layers, who were the manual workers maintaining the tracks. The below photo shows a Chef at work with his staff in a carriage kitchen in 1907, with a Plateman in the foreground washing and drying plates. 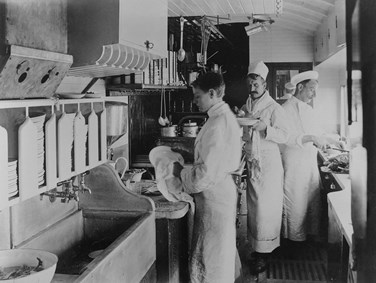 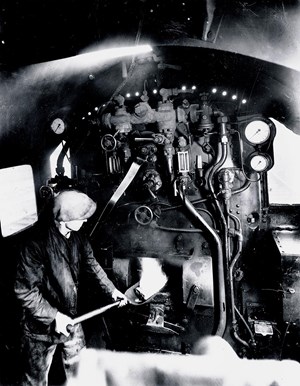 This photograph of a gang of railway labourers working on the track at St. Pancras was taken by John Galt, a missionary with the London City Mission and an amateur photographer. Plate-laying gangs and navvies started at 6.00am and finished 12 hours later. Compulsory Sunday work meant that anyone not working that day would forfeit a day's wages. Track maintenance was hard and often dangerous work and offered few prospects. Labourers were expected to work in all weathers and were poorly paid. 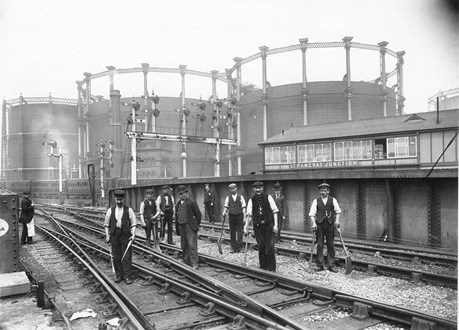 An Under-Shunter worked under the direction of the Head-Shunter and coupled or uncoupled railway vehicles, applied brake to wagons, directed units into sidings and otherwise assisted in shunting operations. 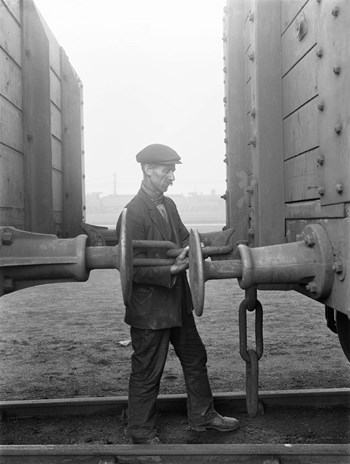 The cloak room attendant received luggage from passengers, issued vouchers, and received booking fees; stored luggage on racks and returned it to owners on production of vouchers; made returns and handed cash receipts to station master or to cashier.

The railway porter’s duties were multifarious and usually included some or all of the following in the passenger department: assisting passengers with luggage and storing in the luggage office or van of train; calling out destination of station as the train approaches the station and the name of the station while the train stands there; shuts the carriage doors as the train departures; supplies rugs, pillows etc to travellers on night trains; cleaning station platforms and other areas of the premises; removes old timetables and pastes up new ones; at large stations often does specialised work such as coal porter, train indicator porter etc. 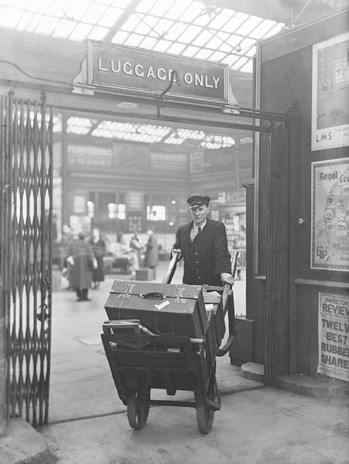 A head-shunt is a length of track feeding a number of sidings that permits the sidings to be shunted without blocking the main line, or where two lines merge into one before ending with a buffer, to allow a run-round procedure to take place.

The Head Shunter is in charge of a number of shunters at a large goods yard.  Move wagons into position and marshals them in the yard or siding; usually signals to the engine driver or shunt horse driver with arm movements to move vehicles backwards and forwards or to stop as necessary. 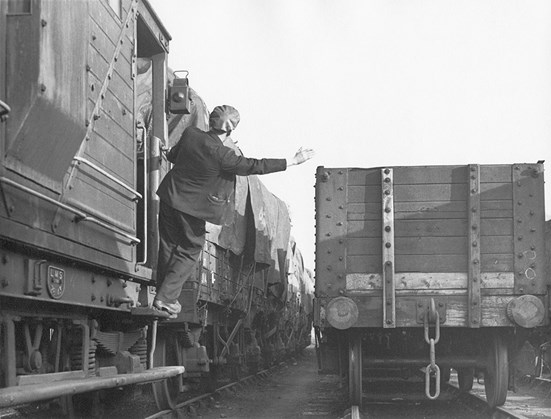 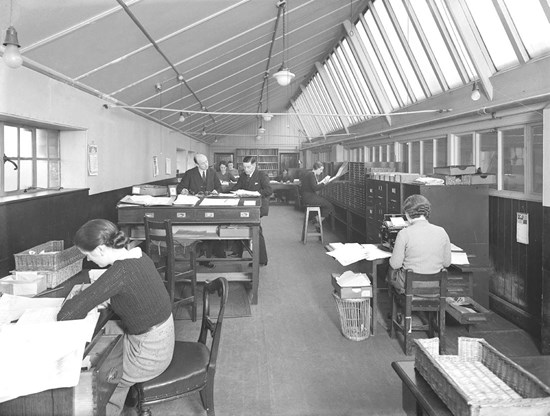 The pointsman's job was to change the points so that trains could transfer from one track to another.

Below is a cartoon depicting an overworked pointsman, 1872 by Punch. The cartoon shows the problems of the increasing amount of traffic on the railways. The pointsman had the responsibility to make sure that trains went through junctions safely and at the right times. The pointsman in the cartoon is depicted as unsure whether the next train to arrive will be an express, an excursion or a cattle train! 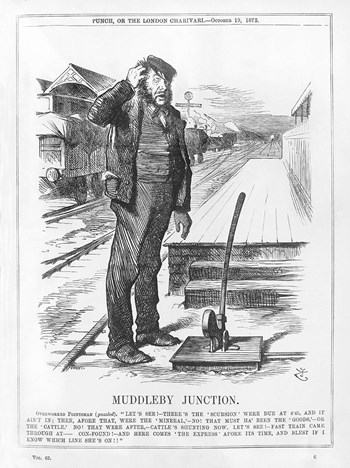 Served at the bar of the hotel, restaurant or railway bar. Below is a Barman at work in a railway buffet car, 1938. 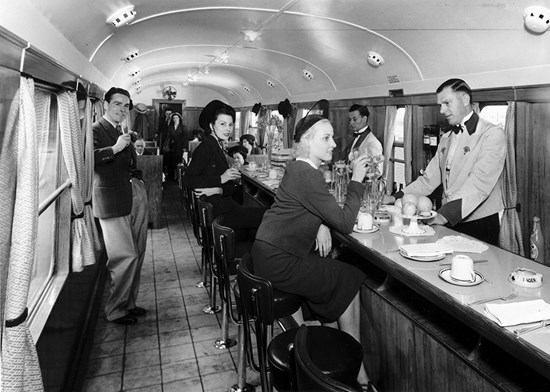 A Capstan Youth worked with the Capstan Man and moved trucks in goods depot by depressing foot lever actuating automatic capstan to which one end of rope is attached, other end being attached to a truck. A capstan is a broad revolving cylinder with a vertical axis used for winding rope or cable, powered by a motor or pushed around by levers. 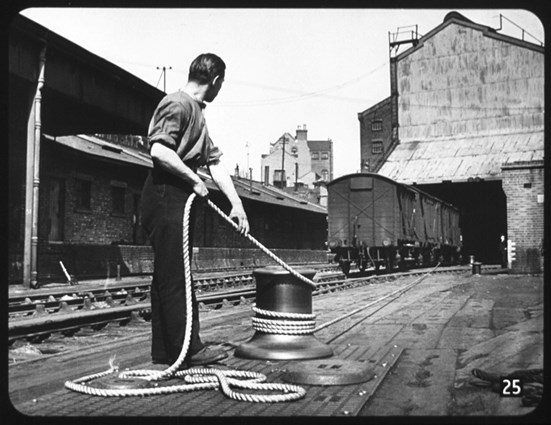 Applied extra brake power to mineral train trucks at top of steep incline by inserting ‘sprags or scotches’, i.e. billets of wood, between wheel spokes and axle guards to prevent wheel turning; rides on train to bottom of incline, where he would then remove the ‘sprags’; or was similarly employed in shunting yards under direction of shunter; brakesman.

Worked in the machine shop and probably as the name implies would have been inexperienced and learning the trade.

A porter (grade I) who fetched coal for fires in waiting-rooms, booking offices, etc., of a railway station.

A Page worked in the Hotels Department.

Where lighting was provided by gas or paraffin the attendant would be responsible for ensuring the incandescent burners (mantles) were clean and replacing where necessary in order to avoid accidents or explosions.

A Delivery Sheet Registrar worked in the Goods Department.